Based on a Mar. 9th lecture by Gearóid Ó Súilleabháin

Another Richard Poynder interview that jumped out at me was the 2006 conversation with Lawrence Lessig, leader of the Free Culture Movement and co-founder of Creative Commons, who was mentioned in less than glowing terms by Richard Stallman. 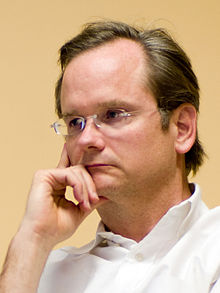 Lessig is generous in citing Stallman and the Free Software Movement as key influences on his book “Free Culture”. Stallman is less so, noting in the Poynder interview problems he has with some Creative Commons licensing, and expressing the view that Lessig’s book shows him to be “less ethically firm”. The disagreement appears to reduce to Stallman’s insistence that people have a fundamental right to copy creative works while Lessig argues for a more nuanced position.

It is therefore perhaps a little odd, given Stallman’s overt disappointment in Lessig’s failure to be absolutist, to read Andrew Keen’s criticisms of Lessig in “The Cult of the Amateur”. “A fronte praecipitium a tergo lupi” Lessig might have been thinking in reading that he and “cyberpunk William Gibson laud the appropriation of intellectual property.” But Lessig is a law professor and more able than most to defend himself, which he does quite comprehensively in a May 2007 post on his own site. Lessig suggests the Keen book can only have been intended as masterful “self-parody” and is “riddled with falsity”, errors he subsequently proceeds to parse in detail.

That said, I must confess to still preferring Keen’s take on amateurs.