The PBS interview with Marc Prensky regarding his “Digital Natives, Digital Immigrants” concept reminded me that no discussion of technology can truly be said to be complete without mention of Douglas Adams. “The Salmon of Doubt”, published posthumously, included his set of rules describing human reactions to technologies: 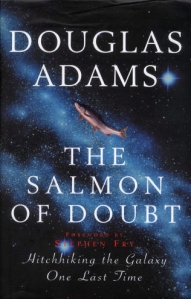 In the PBS interview Prensky makes several throwaway remarks about the future which go unchallenged: we might have less privacy but that we’ll grow accustomed to it; we’ll lose some things, like “flowery writing”, but we’ll gain others; Google search is wonderful but “the next thing that comes along will be even better”. Prensky’s Digital Natives, Digital Immigrants classification has been much criticized. Several of those criticisms, ranging from mild to severe, are referenced in The Digital Natives / Digital Immigrants Distinction Is Dead, Or At Least Dying. Mark Bullen’s blog, Next Gen Skeptic, points to several studies that contradict Prensky with hard research concluding that the next generation’s use of digital technologies is more complex than characterised and certainly not homogeneous. The argument that there is as much variation within the digital native or net generation as there is between generations is noted in an article in The Economist, The net generation, unplugged, which makes telling points about superficiality in respect of student familiarity with digital tools and the nature of online youth activism.

In looking at Prenksy’s website I see that he refers to himself as a “Practial Visionary”, “World Influencer” and “Thought Leader”. Immediately I thought of this:

The inclination to excessive self-promotion online is pervasive. And unnecessary. Let the work speak for itself. Or at a minimum consign the more narcissistic twaddle to the back cover of the next book. Mind you I suspect it has been ever thus and the internet simply acts as amplifier and repeater.
Perhaps I am misconstruing biography as braggadocio. There I defer to the aforementioned Mr Adams: “If it looks like a duck, and quacks like a duck, we have at least to consider the possibility that we have a small aquatic bird of the family anatidae on our hands.”